Click on the link to see a review of Jenny’s fiddling/ vocals/ songwriting on Eclipse.

The Bluegrass Special May 2011 Eclipse Review

Click HERE to check out The Bluegrass Special’s review of Eclipse!

Warm, welcoming, buoyant are but a few of the attributes of Bill Emerson’s wonderful Eclipse, an inspired successor to last year’s Southern. Departing from Southern’s dependence on material mostly from outside sources and emphasis on vocal performances, Eclipse’s 14 songs are dominated by nine strong instrumentals penned by Emerson himself, whose sterling banjo work is energetically supported by Tom Adams on guitar, the impressive Jenny Leigh Obert on fiddle and Marshall Wilborn on bass with mandolin duties being evenly divided between pickin’ studs Jimmy Gaudreau and Chris Henry. Whereas Southern had its share of heartbreak songs, Eclipse accentuates the positive, right from the git-go with Emerson’s high flying, bouncy instrumental, “New San Juan,” an occasion for all the players to step in with singsong solos, at which Obert’s fiddling is most affecting in a song with a wide-open, joyous feel about it. The assembled players, led by Wilborn’s warm vocal (with harmony help by way of Lynn Morris), fairly sprint through the traditional “Jesse James,” with Gaudreau pitching in a couple of sparkling mandolin romps around Obert’s energetic fiddling in a sunnier version of this tall tale than Bruce Springsteen opted for on his Seeger Sessions album. As impressive as she is with a fiddle in hand, Obert has a mean way vocally with a kissoff song, as she demonstrates on her own “Don’t Come Around,” spitting out the lyrics’ harsh invective with the sort of verve and unforgiving attitude Rhonda Vincent has trademarked in her more spiteful musical moments (Obert’s strong mountain voice even bears some resemblance to Vincent’s), then underscoring her resolve with some heated fiddling along the way. The only other vocal on Eclipse comes near the end, as Tom Adams persuasively occupies the role of a “Poor Rebel Soldier” in the bustling traditional tune documenting a Confederate soldier’s eager anticipation of his return home to Tennessee, although he hints that he may never stop fighting.
Vintage Bill Emerson during his Country Gentleman days, performing the classic bluegrass version of ‘Fox On the Run.’ Emerson heard the original Manfred Mann single (written by Tony Hazzard), reconfigured it in a bluegrass arrangement and recorded it with Cliff Waldron before joining the Country Gentlemen.
Manfred Mann, ‘Fox On the Run,’ Tous En Scène (from France), September 5, 1969. Mike d’Abo on lead vocal.

Otherwise, Emerson leads the band through a variety of instrumental tunes of varying textures and moods. “Chilly Winds,” sparked by Emerson’s measured three-finger picking, Gaudreau’s high-steppin’ mandolin lines and Obert’s long, lean fiddle cries, is a bit more heated than the title suggests; the lilting beauty “Espanol” launches with an atmospheric Emerson banjo solo structured to conjure the proper south of the border mood while modulating between an easygoing groove and a rapidly rippling sortie ahead of a lovely, longing Chris Henry mandolin solo that Emerson picks up on and enhances when he returns; furious and burning, “No Steering—No Brakes” and “Dickenson County Breakdown,” coming on each other’s heels, hit that hard charging Flatt & Scruggs groove, keyed by Emerson’s rolling banjo, Obert’s red-hot fiddling and Gaudreau’s and Henry’s precision, lightning fast mandolin workouts, the latter especially standing out for holding his own and then some in a jaw dropping display of manual dexterity when he enters “Dickenson Country Breakdown.” Following Adams’s convincing portrayal-in-song of a Rebel soldier’s anticipated return home, Emerson leads the way in the high-energy strut of “The Grey Ghost” by interpolating a couple of bars of “Dixie” into his singsong soloing before ceding the spotlight to Henry and Obert, who follow Emerson’s lead in developing discursive variations on the melodic theme before handing it back to Emerson for a final, celebratory jaunt and another taste of “Dixie” before closing out matters. Southern was so on the mark that Emerson could be forgiven if Eclipse had not lived up to its predecessor’s high standard, but in fact the man and his mates have succeeded in taking a different route while honoring Southern’s infectious spirit. You get the feeling Bill Emerson’s onto something special here.—David McGee

Click here to check out the FAME review of Eclipse.

The Washington Post has called Bill Emerson a “Banjo Legend.” Hmm… that’s like saying Dolly Parton writes a fair song or is just a little bit on the cute side, or saying that gas prices have inched up just a few cents in the past year—–you know, an understatement, right?

There are a few cuts with vocal guest stars, as well.  Marshall Wilson and Lynn Morris deliver a romp through history on “Jesse James,” while Tom Adams delivers a fine vocal on “Poor Rebel Soldier,” and Jenny Obert shows off her beautiful tones on “Don’t Come Around,” where she sounds like a mountain angel.  All along the way, you’ll find nothing but the best in banjo licks from one of the best, and that’s as it should be!

Bill Emerson and Sweet Dixie have added Jenny Leigh Obert to their roster for 2011. Winter will be spent recording Sweet Dixie’s new album. The band will begin performing for the season of 2011 in spring.

Jenny has been recording with Bill throughout 2010 on his instrumental album, to be released in April 2011. The album will feature the new original instrumentals of Bill Emerson, performed by Bill, Jimmy Gaudreau, Marshall Wilborn, Tom Adams, and Jenny Leigh Obert, with guest performances by Janet Davis, Chris Stifel, and Lynn Morris.  Recorded in Browntown, VA at Phoenix Productions.

On October 17, 2010 Jenny Leigh Obert won the Myersville Trolleyfest Bluegrass Open Solo Competition.  The contest consisted of an elimination round and a final round where each contestant played two songs, for a total of three performances per person.

The contest was held in Myersville, MD and was part of a two day festival.  Entry was open to all ages and bluegrass instruments (banjo, fiddle, mandolin, dobro, and guitar).

Today at the studio…

George of Phoenix Productions, Bill Emerson, Marshall Wilborn, and Jenny Leigh Obert completed the tracks on “Don’t Come Around,” one of Jenny’s originals.  All we have left to do is mix and master…..stay tuned.

Jenny Leigh won both old time and bluegrass divisions, as well as the bluegrass band competition, in which she sang and played her original tune, “These Flowers Bloom Only For You.”

Yes, he summited Everest and he is the greatest dad in the world.

I’ve been playing a lot of old time fiddle with David McLaughlin on clawhammer banjo, over at the Nancy Shepherd House Inn in Winchester, VA. Lots of playing, not much talking, and intensely enjoyable sessions. A couple of David’s originals linger in my head…Rockbridge and My Pretty Orchid are my favorites right now.

About a month ago, I wandered (in a car) over to the Nancy Shepherd House to see Old Sledge on the back patio for a house concert. The music was wonderful. The band sang and played beautifully, and had a very enjoyable energy. After the show, we had a small gathering in the parlor, where friend Tara Linhardt joined us on guitar for awhile, then David sat for a few tunes after Tara took off. Finally, Chance and I managed to stay up until 5 with two fiddles.

I drove back to Middleburg and proceeded to cook breakfast for eleven folks up at the farm around 7 that morning, still going off the energy from the awesome jam. By the way, Chance McCoy and the Appalachian String Band cd, which I acquired at the end of the evening, is a well-produced, lovely collection of performances.

It was good to see Old Sledge again, a few weeks later, as we shared a bill with them at the Waterford Fair, Waterford, VA (1st weekend in October). The singing and playing in this nice three piece is highly recommended for ears of all ages and dispositions. Its just one of those things thats good for ya, like green tea. Everybody needs old time. 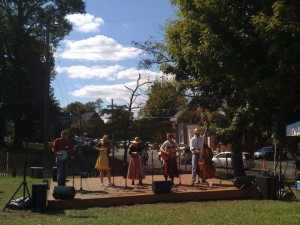